Pay Disparities by Race and Sex

The wage gap can't be explained without discrimination 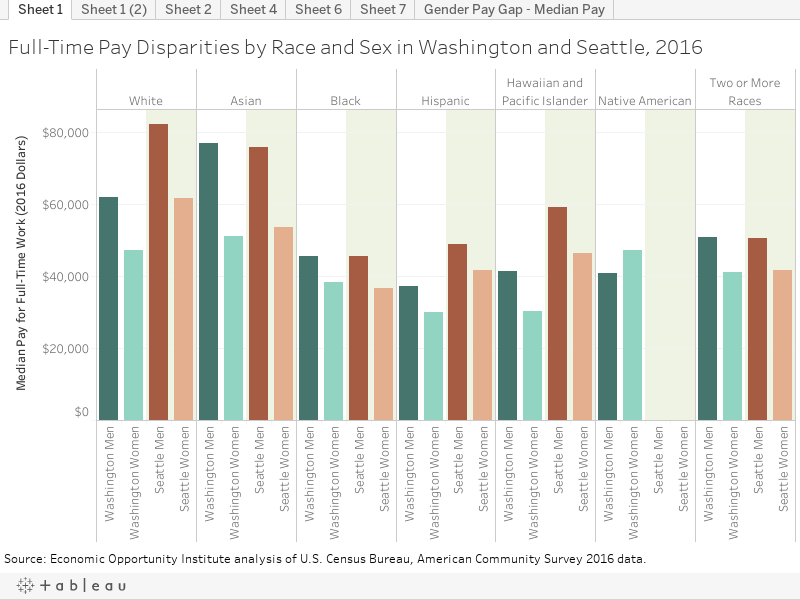 Despite existing state and federal equal pay laws, women are still paid less than men in almost every occupation, and workers of color are paid less than White workers. Washington first prohibited discrimination in pay based on gender in 1943, and Congress passed the Equal Pay Act in 1963.

At the middle of the earnings spectrum, White men in Washington made $62,037 in 2016, compared to $47,216 for White women. The typical Latina woman was paid less than half a White man’s earnings. Median earnings for Asian men and women are higher than for other groups, but the full wage range includes both very high wages in the tech sector and very low wages in personal services, accommodations and other low wage occupations.

Even after accounting for occupation, education, experience, time out for family care, and other such factors, scholars have consistently found that the wage gap cannot be explained without the influence of discrimination and cultural assumptions. Often, women are paid less when they are hired and receive lower raises, even when they ask for them. Multiple studies have found that individual managers frequently make job assignments and promotion decisions that favor men due to cultural assumptions about gender and race.