How, Exactly, Does Trade Bring Prosperity?

From the Huffington Post | By Stan Sorscher, Labor Representative for SPEEA and EOI Board Member

I work for a labor union in the aerospace industry. We are 100% in favor of trade. We make products the rest of the world wants to buy.

With increased trade we expect more prosperity. Instead, we see the American economy de-industrializing and job security at historic lows. So, what’s going wrong? 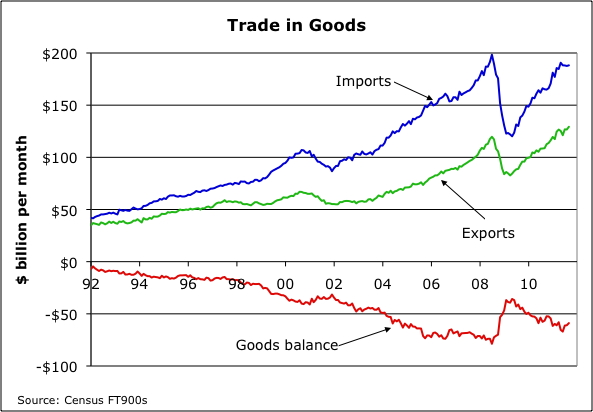 Figure 1 tells the story. Since NAFTA and WTO took effect around 1995, our trade deficit has widened steadily, except for the 2008 crash, which cut imports more than exports.

The language for trade is deceptive. We speak of “free trade agreements,” which sounds like freedom, and evokes the image of prosperity. Maybe we should call them “trade deficit agreements,” since that’s what they do.

We have alternatives. Today, many countries take a different approach to trade, and they run trade surpluses. Japan, Korea, Singapore, and Germany run trade surpluses and they have high living standards. China’s very effective industrial policies are the opposite of free trade. Their growth is phenomenal. It could be even more impressive if workers and communities in China had more say in how their gains were allocated. (Please finish this post, then get a cup of coffee, sit down and listen to this sensational radio piece.)

Since NAFTA and WTO took effect, factories in America closed, entire industries declined, and millions of good jobs moved offshore. China’s industrial policies are a credible threat to our aerospace industry – one of the last bright spots in our trade profile. Technology and capital for new industrial capacity goes to China, India, and Russia, rather than Michigan, California or Pennsylvania.

Why do we insist on an underperforming trade policy that enriches a few, and undermines civil society in America and abroad, while doing little good or real harm to workers and communities?

What if we could have trade AND prosperity? We should be thinking about different and better trade agreements, not more NAFTA-style de-industrialization agreements.

A different trade policy should reflect our own values and history. We forbid child labor and sweatshops. We have minimum wage laws and labor laws with basic worker protections that helped build a strong middle class. We protect clean air and clean water, which are essential for public health. We regulate food and drugs, which builds trust in the most basic interactions between businesses and consumers. We set a high standard (maybe not high enough) for regulation of banks and financial markets. As we industrialized, we chose policies and values for our own domestic economy that created a prosperous middle class and raised living standards.

Free trade policies create trade deficits because they are designed to protect U.S. companies who want to move production to countries that ignore human rights, punish workers for forming unions, silence dissent, pollute the environment, and put public health of their own citizens at risk. The Korea-US trade deficit agreement specifically strips away legitimate and prudent financial controls enacted by Korea to prevent financial bubbles. Maybe we could call free trade agreements “agreements to undermine civil society at home and abroad.”

Each time we pass a new trade deficit agreement, we are endorsing bad behavior that we would never accept in our domestic policy. Worse than that, we are putting our own domestic producers at a disadvantage for keeping their production in America.

American trade negotiators are working on the next big trade deal, called the Trans-Pacific Partnership. Already, multinational companies are demanding that worker protections in TPP be as weak as possible. They prefer no protections at all.

Respected mainstream economists argue that under our “agreements to undermine civil society at home and abroad,” low-wage countries will eventually enjoy prosperity, perhaps with civil unrest and violence along the way. Probably so. Wouldn’t we prefer that developing countries achieved a better life because of our good trade policy, rather than in spite of our bad trade policy?

When we ask for trade policies that encourage investment in our domestic economy, and set reasonable standards for human rights, labor rights, the environment, public health and legitimate financial regulation, we are helping ourselves by balancing the interests of workers and communities in America and elsewhere, with the interests of businesses and investors. That’s the way we built a strong middle class in America. It should be the foundation of our trade and economic policies.