Bending the Arc of History

By Stan Sorscher, EOI Board Member, and Labor Representative at the Society for Professional Engineering Employees in Aerospace (SPEEA)

Many economists and policy-makers struggle to explain growing inequality and the erosion of the middle class.

Nobel laureate economist Paul Krugman has a simple explanation, “…corporations use their growing monopoly power to raise prices without passing the gains on to their employees.”

The top 1% take 93% of all new gains created in our economy.

They divide gains that way – because they can!

Years ago, manufacturing workers had relatively strong bargaining power, which created a wage floor for all workers in the conomy. Not anymore.

Lately, millions of steady retail jobs have been transformed into part time work. A part-time employee at Home Depot, Wal-Mart or Safeway waits to see how many hours are in the schedule and must ask for extra shifts to pay rent, buy food and gas, and pay bills. A part-time employee must constantly please the boss to get work. These workers lose negotiating power. Their employers gain negotiating power. 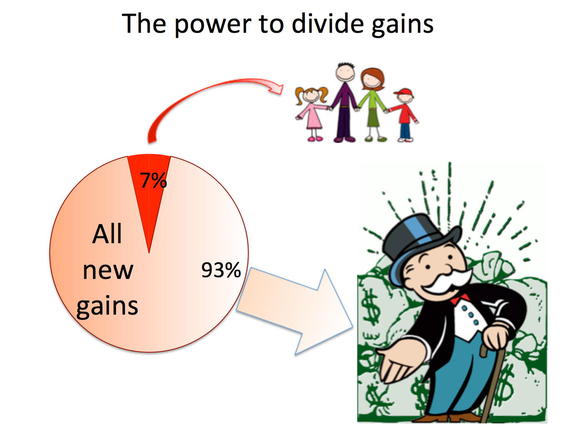 Adjunct professors with contingent positions make up 50 to 70% of higher education faculty. Historically, professors had “tenure” – a solid form of job security. Adjuncts have no market power, no bargaining power.

Wal-Mart popularized a very aggressive business model based on their dominant market power over suppliers, communities and workers. Boeing used its dominant negotiating power to extract billions in concessions from employees, suppliers and Washington State, before announcing thousands of layoffs and a $10 billion stock buyback. Amazon’s CEO uses similar dominant bargaining power to extract gains from book publishers, telling them, “Your profit is my opportunity.”

Over 800,000 temporary high-tech foreign workers on H-1B visas take mostly entry-level jobs with no bargaining power and no market power. Their employment and immigration status make them entirely dependent on their employer.

Immigration reform is stalled in Congress, leaving millions of undocumented workers in low-wage jobs with zero market power in their labor market. Comprehensive immigration reform would give those workers the prospect of citizenship, years in the future.

That prospect of citizenship is too valuable to risk by rocking the boat, either for low wage or high-tech foreign workers.

For the larger population, political power is also shifting away from workers and households in favor of those with enormous wealth and influence. In 2012, both presidential campaigns spent over $1B. As a result, our political process resembles an oligarchy where the interests of regular voters are essentially ignored.

Our trade policies shift market power to global corporations and investors, and take bargaining power away from workers.

Those with power and influence will always claim gains. What’s new is that the 1% encounter almost no moral counterbalance from society, and very little market resistance from other stakeholders.

In the mid-70s, “something happened” to weaken the moral, social, and political counterbalance, letting wealth and power concentrate at the top. 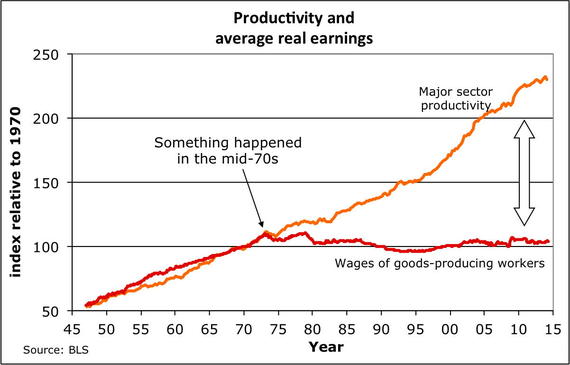 This starts with moral authority. For years, we have been told that fabulous wealth is moral and just. In that narrative, the moral solution to our problems is to make the rich even richer. In this view, it is virtuous for those with great wealth to extract gains from families, our co-workers, and our communities.

In this divisive narrative, those left behind economically must have character flaws.

The movie “Inequality for All” has a great example of this. In one scene, Robert Reich visits workers being laid off, simply to increase profits. Reich tells them, “If workers don’t have power – if they don’t have a voice – inevitably wages and benefits start eroding.”

One of the workers tells Robert Reich, “I’m a proud Christian and proud employee. I think they [the owners] treat me more than fair. … I say for the people making their millions, that’s fantastic. I could have done the same thing if I’d gone to school and had the brains for it.”

This worker is making his particular moral statement – beginning with his religious identity.

The wife of a co-worker makes a different moral statement, grounded in her belief in her husband’s worth as an employee and her expectation of a better life for their children. With a quavering voice and tears forming in her eyes, she asks, “If you have 12 million dollars – if you have a billion dollars! – why do you need that little bit that I have? ….. OK?”

The downward arc of recent history is a consequence of unbalanced market power.

In contrast, Martin Luther King used his moral authority to promote an upward arc of history, “The arc of the moral universe is long, but it bends toward justice.”

In that respect, we can use a positive narrative: All work has dignity. When workers create wealth, we earn a share of the gains we all create. We all do better when we all do better. An economy in an upward spiral is stronger than one in a downward spiral.

We have allowed the arc of history to bend away from justice. We can bend it back.

First, we need to get our minds right. A positive inclusive moral foundation helps us recognize the ominous power relationships that exist now. Pope Francis may have the best perspective on this today.

We can call out the policies, attitudes, and language that concentrate wealth and influence, and push back toward a more sustainable balance of moral, social, political and economic power.

And seriously, someone needs to talk to that guy in the movie.