Taxable Sales as Percent of Income

Even though the sales tax rate is increasing, it's bringing in less money 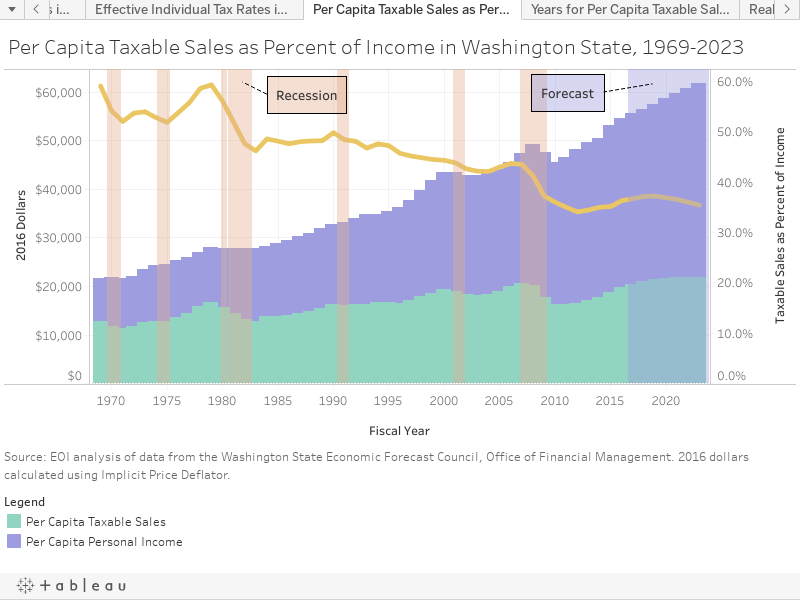 Washington State’s sales tax is the largest revenue generator, accounting for 47.9 percent of the state’s general fund revenue in fiscal year 2017. But over time, that revenue stream is declining as the economy shifts from goods to services.

While the state taxes construction labor, repair services, and some other services, the retail sales tax does not apply to the majority of services. As Washington gets richer, taxable sales have remained relatively flat. In fact, in fiscal year 2016, per capita income in Washington was two and half times greater than in fiscal year 1969, but taxable sales were only one and a half times greater.

The increase in online sales is also putting pressure on retail sales tax revenue. Currently, only online retailers that have a physical presence in Washington – Amazon does, eBay doesn’t – have to collect sales taxes on sales to Washington residents. In 1998, online commerce accounted for about 0.3 percent of commonly taxable retail trade nationwide. By 2013, online commerce accounted for almost 13 percent. Washington is trying to stem the tide of decreasing sales tax revenue by forcing online retailers to collect sales tax.

Lower-income people use the internet much less than higher-income people, making them less likely to benefit from tax-free online sales. In 2018, 98 percent of adults in households with a yearly income of more than $75,000 use the internet, compared with 81 percent of adults from households with less than $30,000 in yearly income.