Public sector cuts are holding back economic recovery in Washington

The latest economic forecast for Washington state, issued by Washington’s soon-to-be-former Chief Economist Arun Raha, shows we may be beginning to dig out from the recession – but public sector cuts are holding back the recovery:

So overall, signs in the private sector seem to be trending positive – but it’s also clear public sector cuts are holding back the state’s recovery. 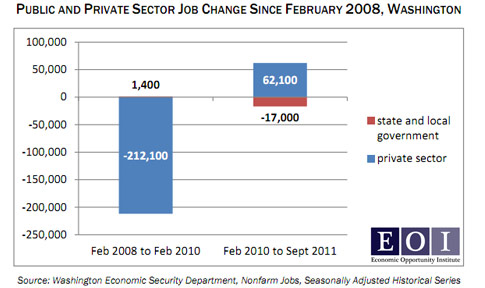 This point is not lost on Ezra Klein, who points out in the Washington Post that government layoffs are acting as a drag on our national economic recovery:

As Isaac Shapiro and Josh Bivens of the Economic Policy Institute have found, the rate of private-sector job growth during this recovery has actually been comparable to that after the 1990 and 2001 recessions. What makes the current recovery different is that, unlike after past recessions, the unemployment rate is getting battered by government layoffs this time around.

To rebound quickly and rebuild our state economy, Washington legislators need to stop the bleeding by making robust investments in our state infrastructure. Ending corporate tax breaks and maintaining investments of $2 billion in education, health care, and services would help do just that, and result in 9,000 to 17,000 additional private and public sector jobs.

Learn more: A Jobs and Economic Recovery Plan for Washington »