Carol Joyner is the Director of the Labor Project for Working Families (LPWF), in partnership with Family Values @ Work, a partner organization of Washington Work and Family Coalition.

Any woman who’s gone through pregnancy hears the same advice: hydrate more and listen to the needs of your changing body.

Almost everything a pregnant woman does requires adjustment. Eliminating caffeine and alcohol, hydrating more frequently, avoiding strenuous activities — all are immediate considerations, activities women have control over. But what happens when pregnant workers have little to no control?

For women throughout the U.S., doing what’s right when you’re pregnant can bring unnecessary hardship. All too often, pregnant women are forced to choose between what’s best for them medically and what they need financially. Too many employers deny requests for simple workplace accommodations — a chair, an extra bathroom break, a bottle of water to drink — and fire pregnant women, forcing them to go on unpaid leave or quit their jobs at a time when they most need financial security.

The National Women’s Law Center and A Better Balance recently published a report shedding light on the difficulties that so many pregnant women face on the job. The stories they’ve collected detail a variety of abuses. Denial of fluids, being forced to stand, being refused bathroom breaks — all are common complaints about employers who, in denying these rights, often break the law.

During her pregnancy, Hilda Guzzman, a full-time Dollar Tree employee in Long Island, asked her boss for a stool to sit on while working at the register for 8-10 hours a day. The response? “You can’t get special treatment,” her boss declared, “since a man can’t get pregnant.” The pressure from standing all day caused bleeding and premature labor pains, landing Hilda in the emergency room every few days. Quitting was not an option: Guzzman needed the job to be able to cover her medical expenses and pay the rent.

Dr. Lucy William, an emergency room doctor, treated a pregnant cashier who arrived at a New York hospital with severe dehydration. Turns out her employer refused to let the cashier drink water at the register.

In most states, pregnant women lack basic job protections for pregnancy-related accommodations. The federal Pregnancy Discrimination Act (PDA) offers protection against discrimination — being treated differently from non-pregnant co-workers. But the law does not include safeguards should a woman need work adjustments as a result of her pregnancy, such as rest breaks, assistance with manual labor and recovery time following childbirth. As KJ Dell’Antonia writes in The New York Times, “Sometimes equal treatment is not enough to allow a woman to stay on the job.”

Fortunately, a growing movement of activists, organizations and elected officials are championing workplace fairness for pregnant women. Just recently, New York City took a major step in ensuring that pregnant women are not forced to choose between their health and their job. In a unanimous vote, the City Council passed the Pregnant Workers Fairness Act (PWFA), which stipulates that employers in New York cannot force pregnant workers out of their jobs or deny them reasonable job modifications. The city joined a handful of states, including California, Illinois, Hawaii, Louisiana, Maryland and Texas, that have offered similar safeguards to pregnant women. 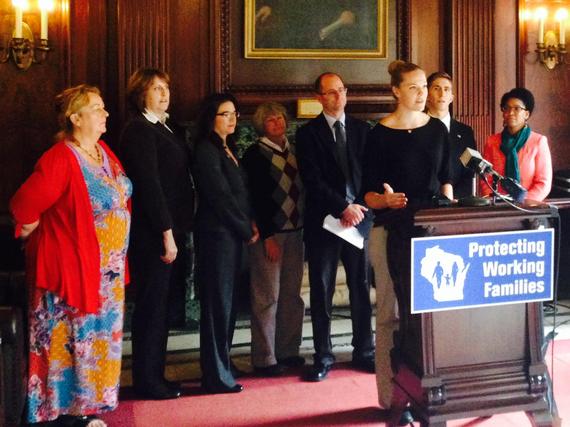 Members of 9to5 Wisconsin, an organization dedicated to winning justice for working women, join with Wisconsin legislators to push for pregnancy fairness.

In Washington, legislators are also taking note. The federal Pregnant Worker’s Fairness Act (PWFA), re-introduced earlier this year in both the House, by Jerrold Nadler (D-NY), and the Senate, by Robert Casey (D-PA), would close existing loopholes, ensuring that workers have reasonable accommodation for pregnancy, childbirth and related medical conditions. In recognition of the 35th Anniversary of the PDA on October 31, groups from across the country are planning a week of advocacy to highlight the important milestone the PDA represents and to push for greater protections for pregnant women on the job.

As the economy changes, so too should our workplace protections. Three-quarters of women now entering the workforce will become pregnant while working. Many, particularly low-wage women working in retail and service jobs, know all too well the dangers associated with lacking basic work accommodations.

Legislative protection like the PWFA leaves us all healthier — women and families, employers and taxpayers alike. It improves the health of women and children, decreasing the likelihood of childbirth-related complications. It guarantees economic security for millions of pregnant women and their families. It strengthens our economy by protecting jobs. And it benefits small businesses’ bottom line through reduced turnover, increased employer loyalty and higher productivity.

Pregnant women in our country deserve better; their work has value and their children make up our future society. Think about your mom, your sister or daughter. If you agree that they deserve basic guarantees and opportunities, then join with millions of Americans who support the PWFA. It’s beyond time that pregnant women get a break.

Via the Washington Work and Family Coalition