When you start a career in nonprofit work, you’re generally giving up on earning Bezos-like money, even if you make it to the top. As an old mentor used to say, “There are hundreds of dollars to be made in doing the right thing.” To wit:

All nonprofits. All paying significantly less to leadership than the private sector. But the nonprofit healthcare industry doesn’t follow this model.

This year, the Economic Research Institute compiled a list of the 10 highest-paid nonprofit CEOs. Kaiser was number 6. Nine of the ten were healthcare providers. 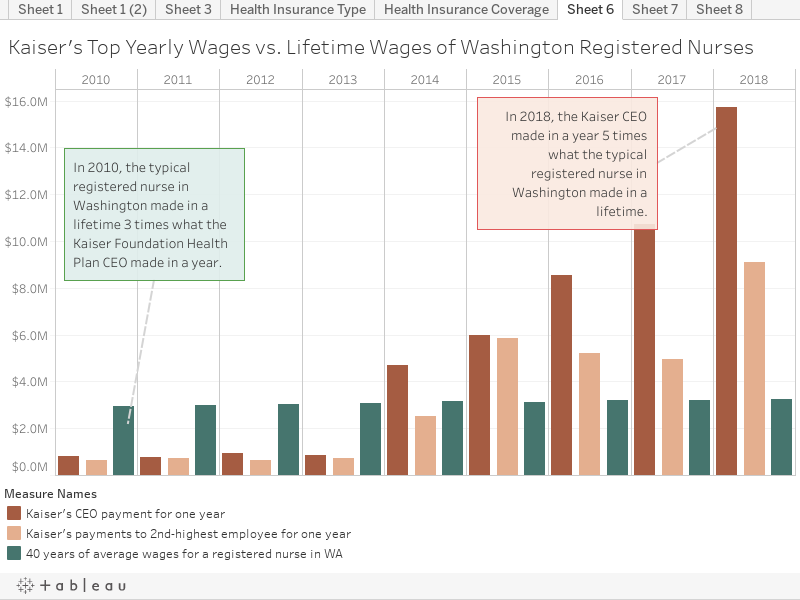 Sure, the CEO should be paid more. But the Kaiser CEO makes 193 times what a typical Washington nurse makes. Does the Kaiser CEO work 193 times as hard as our state’s nurses? Does he achieve in a day what a nurse achieves in 9 months?

Egregiously high executive compensation is part of the reason California revoked the nonprofit status of Blue Shield of California, its third-largest insurer, in 2015. Michael Johnson, who resigned as public policy director after 12 years at the company, said the insurer had been “shortchanging the public” for years by shirking its responsibility and operating too much like its for-profit competitors.

The cost of health care is certainly going up, but it’s not because staff like registered nurses are being paid more. When accounting for inflation, they were actually being paid $4,000 less on average per year in 2018 than they were in 2010.

Mel Sorenson, a lobbyist for the health insurance trade association, testified in January that Cascade Care’s public plans based on Medicare reimbursement rates would break the financial backs of health care providers.

“Non-public option plans can’t compete … on a straight-up basis with a public option plan that has a public franchise offering them to reimburse covered services at substantially lower rates of reimbursement that can be available in the commercial marketplace. It is simply not a competitive environment.”

Similar arguments occurred a few years ago when health care companies feared states’ expansion of Medicaid under the Affordable Care Act. Or in 1966, when Medicare began. It’s “the beginning of socialized medicine” the American Medical Association said in advertisements nationwide.

But Medicare is extremely popular now, and hospitals in states that expanded Medicaid under the ACA were 6 times less likely to close and had better profit margins than in states that didn’t, according to a 2018 study. And for most services, Medicaid reimbursement rates to hospitals in Washington were 71 percent lower than Medicare’s.

Hospitals made more money under the Medicaid expansion because there were fewer people without insurance that postponed treatment for illnesses until they were urgent and more expensive. These people often couldn’t pay the hospital at all.

Oregon started its standard-plan program in 2016, and it sets the rates that companies can charge. The marketplace is still large. A 40-year-old in Portland getting a silver plan has seven companies to choose from and monthly premiums range from $415 to $486, before tax credits.  These premiums have increased 9 percent in the last 3 years, only slightly higher than the inflation rate of 7 percent.

When originally setting the rates, Oregon took executive compensation into consideration. In 2016, Oregon estimated that every member of the Kaiser Foundation Health Plan system paid $62.88 in premiums every year that went directly into executives’ pockets. At the time, Kaiser Northwest, which covers Oregon and southern Washington, had about 600,000 members. That’s $38 million dollars those members paid directly to executives’ compensation.

Oregon decided its health care companies could afford standard plans. So can Washington’s.