If you live in one of 43 states with an income tax, you’ll have to calculate your state income tax liability along with the federal. But here in Washington (along with AK, FL, NV, SD, TN, TX and WY), residents don’t pay a state income tax.

Sure, it sounds great in theory – we fill out fewer forms and keep more of our money, right? After a closer look, not so much.

Washington State residents may not pay an income tax, but we make up for it with a higher sales tax – nearly 50% of state revenue, compared with the U.S. average of just over 30%. And sales taxes are considered to be some of the most regressive taxes because lower- and middle-income earners pay a higher effective tax rate than wealthier individuals (Graph 1). On top of that, Washington’s sales tax is outdated and inadequate, focused on taxing goods while leaving services largely untaxed.

A state income tax would help to balance and diversify Washington’s revenue stream. While a sales tax must be adjusted frequently to ensure a steady revenue stream, income tax revenues tend to grow at the same rate as the economy, helping to maintain a steady tax base.

During times of economic crisis (like the current recession), states with income taxes have been able to direct targeted tax increase to those most able to pay. The best example of this comes from Oregon in January of this year, when voters passed a referendum that raised taxes on households with a taxable income of over $250,000. These types of increases ensure taxes are levied on those most able to pay – and not lower- and middle-income working families. 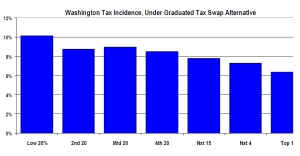 Should Washington voters implement a progressive income tax, it would provide balance in the form of a more proportionate tax incidence. The lowest 20% would still pay a higher effective tax rate than the top 5%, but the disparity would not be as great (Graph 2). A state income tax would also provide a net federal reduction to wealthy tax payers, allowing them to deduct their state income tax from their federal liability.

At a time when state legislators face difficult decision and citizens are seeing drops in revenue translate to cuts in core services, ensuring Washington’s tax structure works for all of its residents should be our top priority.

Graphs from: Leaving Money on the Table