Starts with s-e-x and ends with -ism

The fact that women earn less than men is a major theme of the Bureau of Labor Statistics’ newest databook, Women in the Labor Force. The earnings gap has certainly narrowed over the last several decades, but despite national and state policies to eradicate workplace discrimination, the changes aren’t happening quickly. So does gender discrimination persist in our modern society? Patterns in labor force data spanning decades point to “yes”. 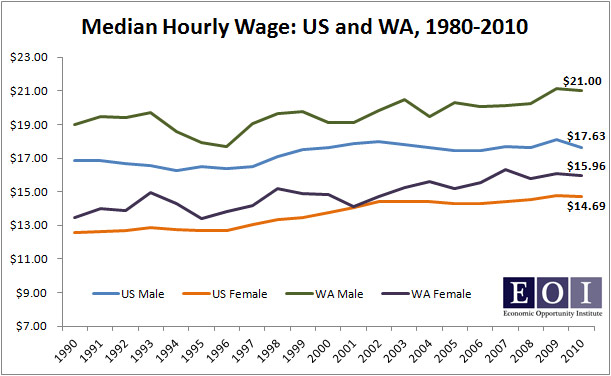 Why the bigger gap in Washington? Washington has higher median wages than many other states (and the U.S. overall) thanks to a concentration of high-wage industries including aerospace and software. However, these industries employ a predominately male workforce – so not only do men earn more in Washington, more men earn more here.

At the other end of the spectrum is the concentration of women in low-wage occupations. The January 1, 2012 minimum wage increase to $9.04 will directly impact 194,000 workers in Washington – 58% of whom are women.[2] In the U.S., 2.7 million working women (and 1.6 million working men) earned wages equal to or less than the prevailing minimum wage in 2010.

Women don’t earn less for lack of education. Nationally, women are more likely to be enrolled in college – 74% of female high school graduates enrolled in college in 2010, compared with 63% of male graduates. The trend is the same for Washington’s high school grads. Across the country, women are also more likely to graduate from college. Now, 36% of working women in the U.S. have college degrees, compared with 28% of their male counterparts.

So, the question remains – why the earnings gap? The National Partnership for Women and Families (NPWF) found that workplace discrimination against women has actually been on the rise in recent years – and not just pay inequality.  NPWF also found that women experience obstacles to raises and workplace advancement. These barriers are likely factors in why women are concentrated in low-wage sectors, despite being more likely to hold a college degree.

So why do women in Washington have a higher median hourly wage than the U.S. as a whole? Two reasons: 1) women in Washington tend to earn more than women in other parts of the country, and 2) the state’s high minimum wage disproportionately benefits women. Yet, we also have wider gaps in earnings compared with the U.S., and men out-earn women in every industry, even those dominated by women.

So unless we’re reserving gender equality for generations to come, it’s about time to put a little more effort into developing labor standards and workplace policies that offer equitable pay, opportunities for raises and advancement and access to workplace benefits. These efforts will no doubt benefit all Washingtonians.