Pay It Forward: No tuition, debt-free graduation – and full funding for higher education

For example, at the University of Washington, tuition costs have increased by 215% between 1989 and 2010 (all calculations in constant dollars). Today total cost for in-state students in tuition and mandatory fees is more than $10,500/year. Tuition costs at community colleges have followed a similar trend, jumping from a little over $1,400 in 1989 to over $3,500 now.

By contrast, for the same time period (1989-2010), the median household income has grown by just one-tenth of one percent. 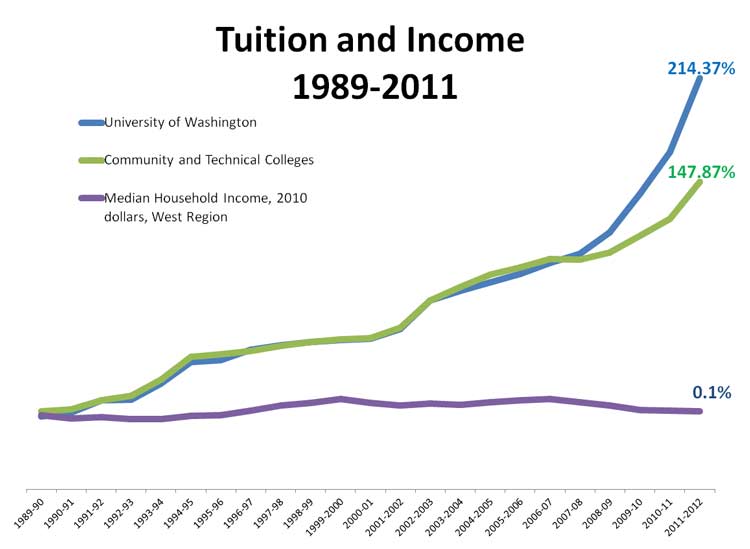 The Pay It Forward solution substitutes today’s “high tuition, big loan” model with “attend free, then pay 3”- that is, students in public institutions of higher education pay no tuition up-front, in exchange for agreeing to pay 3.0% of their annual income over the next 30 years. In so doing, they “pay forward” the opportunity for future students to do the same. (It’s similar to a proposal independently developed by students at University of California-Riverside.)

Start-up funding will be required to get the first few generations of graduates through school and into jobs where they can start paying it forward. This could be a one-time source of private and/or public money used to cover the transition costs, enabling all students to participate in the Pay It Forward plan.

Another possibility is to use current state funding for tuition assistance as the starter fund, and as more students graduate through the pay-it-forward mechanism, gradually expanding the program to all students. Once it’s fully implemented, Pay It Forward will provide enough revenue to fully fund Washington’s public colleges and universities with no additional public revenue necessary.

At the federal level, Pay It Forward could also integrate Pell grant funding ($35 billion for FY 2011) and other sources of federal tuition assistance. A federal system would also simplify and streamline the tracking of graduates and their payback amounts through calculation, attachment, and collection through the IRS 1040 and W-2 forms.

To keep Washington competitive in the globalizing economy, we need a homegrown brain trust of talent and skill to attract good jobs and investment. One of our top priorities as a state should be to ensure all high school graduates have the opportunity to pursue an advanced degree or skilled trade in an institution of higher education. But ever-increasing tuition rates and a reluctance to take on significant student debt are discouraging some students from attending college. Pay It Forward would encourage student enrollment in higher education – particularly those deterred by high up-front costs – and allow graduates more flexibility in career choice without the threat of student loan repayments looming.