It is no secret that men, on average, earn more than women. But despite successful campaigns for social equality in America the last half-century, the gender wage gap has not shown significant improvement since 1990 – even with a changing labor force.

In Washington, the gender wage gap has actually worsened in some respects since 1990. The inflation-adjusted gap in median hourly wages in Washington has barely improved in the last 20 years, and men still out-earn women by more than $5.00 per hour. 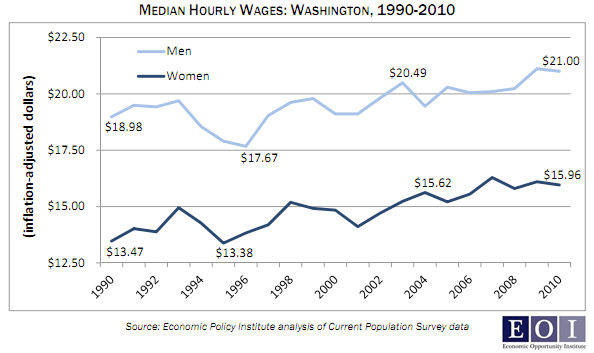 Washington women earn less than men in every industry, even those that are female-dominated. The median annual earnings of women in education, health care, and social assistance jobs are about two-thirds those of their male counterparts. In 2010, women’s monthly earnings were only 63% of men’s, a 2% decrease from 1991.

This is lower than the median monthly earnings ratio of 76%, both because women work part-time more often and because men are more likely to hold the highest paying jobs. A larger proportion of women make less than $35,000 per year because they are more likely to work at low-wage and part-time jobs, whereas men are twice as likely as women to earn $75,000-$99,999 and three times as likely to earn $100,000 or more. 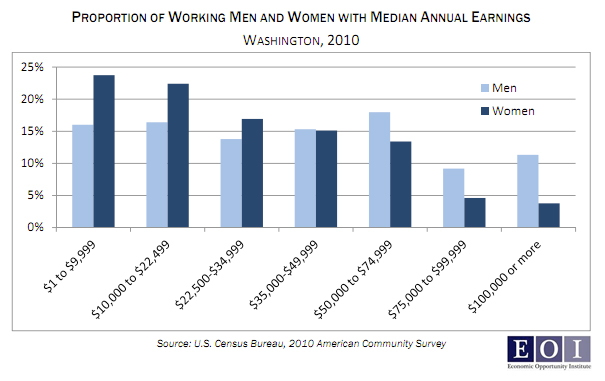 When the economy peaked in 2000, men saw a 25% increase in their monthly earnings since the recession of 1991, while women’s monthly earnings only increased 11%. Just as the rich tend to reap most of the benefits of a booming economy, men enjoy a larger share of wage increases than do women.

Men also earn more than their female counterparts at every level of education; the higher the level of education, the larger the gap becomes. For example, the median annual income for men without a high school diploma is only $7,000 higher than for women, but the gap grows to $27,500 for those with graduate or professional degrees. 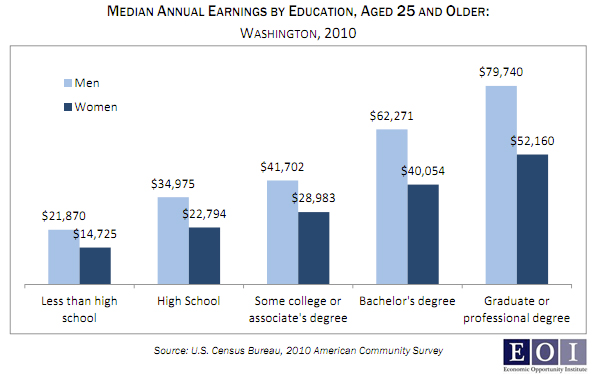 Men also earn more than women within every race, with the biggest gender gap occurring among Asians. Even so, Asian women’s median annual earnings are still higher than all other women of color. Hispanic women have the lowest earnings, making 62% of what white women earn.

Gender disparities in pay also increase as workers get older. This is largely because women are less likely to receive raises and promotions and more likely to devote time to raising children. Women in their early twenties average 77% of men’s monthly earnings, but by their mid-forties women earn, on average, only 60% of what men do.

Gender segregation in the labor force reinforces the wage gap, leaving women at an even bigger disadvantage.  Since 1990, the percentage of female workers in agriculture, forestry, fishing, and hunting has increased more than any other sector, but this shrinking sector offers mostly low-wage jobs.  In contrast, the information sector has become increasingly male-dominated, while it has experienced massive growth and soaring wages.

Women are earning less than men across the board, which is fundamentally unfair.  Worse yet, the wage gap is stagnant – and in some ways getting worse.  For decades women have demanded equal pay for equal work, but the data clearly show we have a long way to go.