Maybe you’ve had that early morning moment of anxiety when you wake up with a fever and a cough that won’t stop and you think ‘Should I go to work today?’  If you’re lucky, your employer offers a few paid days off in case of illness and you can roll over to get some much needed rest. Unfortunately, that is not the case for everyone. More than 41 million working Americans, in industries from fast food to health, education and social services, face the dilemma of taking time to recover from an illness or losing a day’s pay.

Currently, only seven cities in the United States and the state of Connecticut have laws mandating some type of paid sick leave. Yes, that is as bad as it sounds. To give a little context, the United States is the only one of 22 rich nations that doesn’t require employers to provide even a single day of paid sick leave. And though opponents claim that these laws are job- killers and anti-business, recent research indicates that this is not at all the case. In particular, my CEPR colleagues Eileen Appelbaum and Teresa Kroeger recently published a report — co-authored by CUNY’s Ruth Milkman and Luke Elliot — that assesses the impact of Connecticut’s paid sick leave law on business. A number of media outlets have taken note of the policy, and the lessons learned from the experiences of Connecticut employers are valuable for employers, employees and legislators across the nation.

The groundbreaking report, “Good for business? Connecticut’s Paid Sick Leave Law,” draws upon data from a survey of Connecticut employers and onsite interviews to analyze the effects of the law, now in its third year of implementation, on businesses in the state. Contrary to the claims made by foes of the policy, the paid sick leave law has had little or no impact on businesses. In fact, over three quarters of the employers surveyed reported that they were supportive of the law. The report documents a wealth of insights on paid sick leave policies in practice. But I want to zero in on one point in particular that the authors make about the number of days of leave used by employees.

In the Connecticut report, the authors note that the average number of paid sick days available to workers rose from 6.9 days before the law was passed to 7.7 days after passage. Yet employees who took sick leave, on average, used only 4 of the available 7.7 days. Even in businesses with a union presence, where workers have an average of 12.3 days available, they use on  average just 4.4 days of paid sick leave. Moreover, employers reported that, on average, a third of their employees used no paid sick days at all. This stands in direct opposition to the idea that workers would abuse the policy and take as many days off as possible, even when not sick. This suggests that employees view paid sick days as a form of insurance, to be used only as needed. Even when additional days are available to them, employees in reality only take the time off from work that they require when they are ill or need to care for a family member. 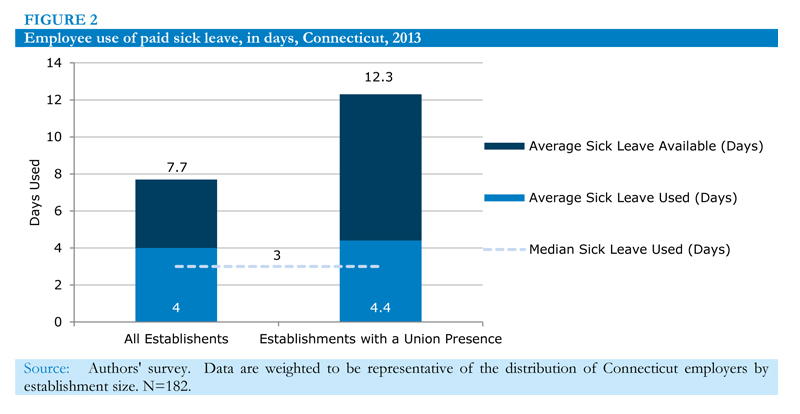 Thirteen states are currently considering or have recently considered paid sick leave legislation. Critics in all of these states have trotted out the canards that this policy is anti-business and imposes an undue burden on employers. But the Connecticut experience serves as an excellent indication that hand-wringing over possible abuse of the law is unfounded.