The just-released 2019 Survey of Consumer Finances (SCF) from the U.S. Federal Reserve highlights massive and long-standing disparities in wealth in the United States — both between racial and ethnic groups, as well as within them.

Other families—a diverse group that includes those identifying as Asian, American Indian, Alaska Native, Native Hawaiian, Pacific Islander, other race, and all respondents reporting more than one racial identification—have lower wealth than White families but higher wealth than Black and Hispanic families.

Pick a person at random in America and the more wealthy they are, the more likely it is they are White. By comparison, the bottom half of society is far more racially diverse. 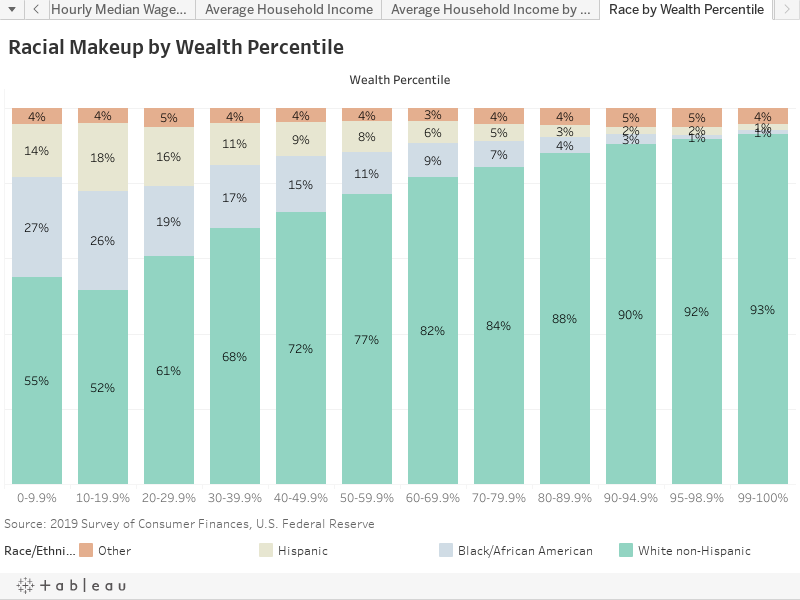 The overall differences between racial groups are not the only significant finding in the 2019 survey. There is also very significant wealth inequality within racial groups, as Matt Breunig’s analysis at the People’s Policy Institute notes:

Lessons from the Great Recession — and Solutions for a Different Future

Since the 2019 SCF was conducted largely before the onset of the COVID-19 pandemic, it doesn’t reflect how these groups are faring economically today – but if data from previous surveys is any indication, the results are not promising. According to the Fed:

After 2013, median wealth rose for all groups, with faster growth for Black, Hispanic, and other families. [But] despite growth over the last two surveys, the typical White family and the typical Black family have yet to recover to their pre-Great Recession levels of wealth.”

Wealth inequality is driven by many sources — including the erosion of worker bargaining power, gender- and race-based pay discrimination — but one thing underpins them all: public policy.

Our economy is the way it is because of the policy choices of the past. While there’s no single panacea, there are a host of policy choices we can make today that will reshape our future for the better, including:

With election season upon us, there’s no better time to be in touch with your federal, state and local candidates for public office!