From 2009 through 2012, Washington’s Legislature made policy-level spending cuts totaling $13.2 billion. They avoided even deeper cuts by modestly increasing revenues and transferring from other funds. Washington also received about $4 billion in federal stimulus funds over three biennia (2007-2013).[1] The austerity approach:

The resulting cuts in public services undermined health and economic opportunity for hundreds of thousands of Washingtonians, particularly harming lower-income individuals and communities.[2]

Health: By the end of 2011: 64,000 people, primarily low-income working adults, lost health coverage through the Basic Health Plan, and the wait list to enroll grew from 0 to 155,000 people. Medicaid cuts eliminated access to dental care, eyeglasses, podiatry, and other services for 180,000 people. 50,000 low-income seniors lost assistance covering prescription drugs. 40,000 seniors and people with disabilities had cuts in home health care that helped them maintain health and independence.[3] Maternity Support Services were cut by $23 million, and 46,000 women lost family planning services.[4]

Mental health and substance abuse disorder treatment: Despite increased need due to the stresses of job losses, drastic cuts reduced preventive mental health services helping over 120,000 people through Regional Support Networks.[5] Overall, per capita state funding for mental health services in 2011 was 20% below the 2008 level, and remained lower through 2016. Per capita state funding for alcohol and substance abuse disorder treatment fell steadily and by 2017 was 45% below the 2008 level.[6]

Higher education: Large cuts resulted in reduced access and fewer course offerings, fewer staff, and large tuition increases. From the 2007-08 school year to 2012-13, student tuition and fees increased 75% at the University of Washington and 35% at community and technical colleges.[7] Lack of funding prevented nearly 145,000 eligible students from receiving State Need Grants from the 2009-10 school year through 2013-14.[8]

Work and income supports: 27,000 families and their children lost child care subsidies by the end of 2011. Continued low public investment meant the early childhood workforce earned poverty wages and the industry was in crisis prior to the COVID crisis. 23,000 families lost TANF grants in 2011, and more families lost grants in subsequent years.[9] 20,000 people who couldn’t work due to disability lost income support.[10] 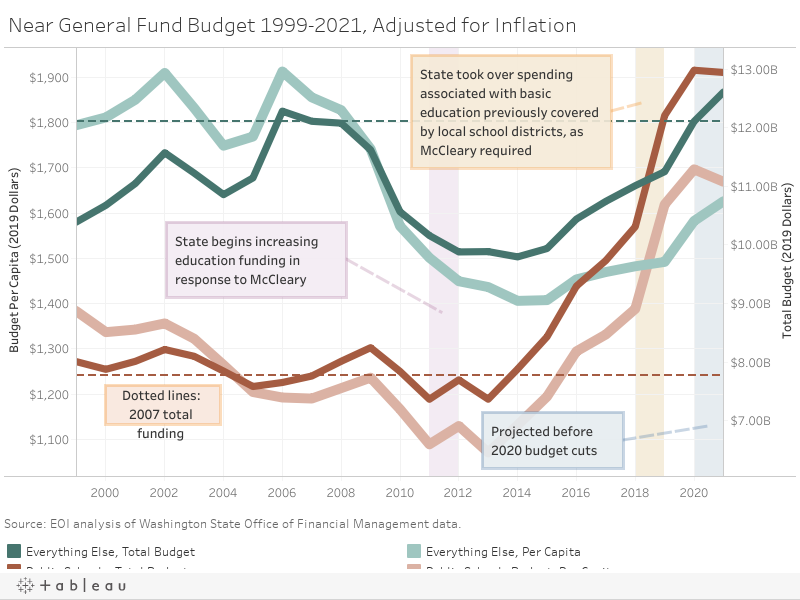 State and local governments and school districts laid off workers, and the state spent less in the private sector, reducing overall economic activity. According to economist Mark Zandi, every $1.00 of state spending generates $1.41 in economic activity.[11] Other economists have estimated multipliers of 1.7 to 2.1.[12] Economists across the political spectrum agree that the negative economic impact of new taxes on the affluent is much less than the positive impact of maintaining state spending.[13]

Cutting income supports and other services to lower-income people was also particularly damaging, both to those individuals and families and to the overall economy. The U.S. Department of Agriculture estimates that SNAP spending has a multiplier of $1.54 for every $1.00 spent. It also creates jobs and supports the agricultural sector.[14] SNAP, along with other government spending focused on lower-income households, also has a higher multiplying affect than general government spending because low-income households spend all of that money, while higher income households tend to save more.

We can avoid the mistakes of the past. By choosing now to raise the revenues necessary to invest in our people and important structures, we can rebuild our economy to be stronger, more equitable, and more resilient.

[1] Emily Makings, “Looking back at state budgeting in the Great Recession, part 2: How the governor and Legislature responded,” April 10, 2020, Washington Research Council.

[10] Washington Budget and Policy Center, “No denying it: At least $10 billion has been cut from the state budget,” Kim Justice and Andy Nichols, Dec 2011.

[13] See Zandi and Peter Orszag and Joseph Stiglitz, “Budget Cuts vs. Tax Increases at the State Level: Is One More Counter-Productive than the Other During a Recession?” Center on Budget and Policy Priorities, revised November 2001.

[14] US Department of Agriculture, “The Supplemental Nutrition Assistance Program (SNAP) and the Economy: New Estimates of the SNAP Multiplier,” by Patrick Canning and Brian Stacy, July 2019.

How to Get Health Coverage

How to Get Small Business Loans

Local Resources for a Variety of Concerns

Federal Relief Doesn’t Do Enough to Prevent a Health Catastrophe

State Government Must Do More to Protect Our Economy

Saving Child Care and Protecting Children in this Pandemic

We Can’t Cut Our Way Back to Prosperity