Your Legislator May Not Understand How Much College Costs

Each of the thousands of students heading to college in Seattle, Pullman, Bellingham, Ellensburg, Cheney, Olympia and other Washington cities this fall will have a different experience in school — but there is one thing they’ll all face together: extremely high tuition.

It hasn’t always been this way though, and many of today’s state legislators — especially those who graduated from Washington’s colleges and universities before the year 2000 — should know it. They had much lower tuition bills than today’s students because the state leaders in office at the time passed budgets that invested significantly more in higher education than the state does today. 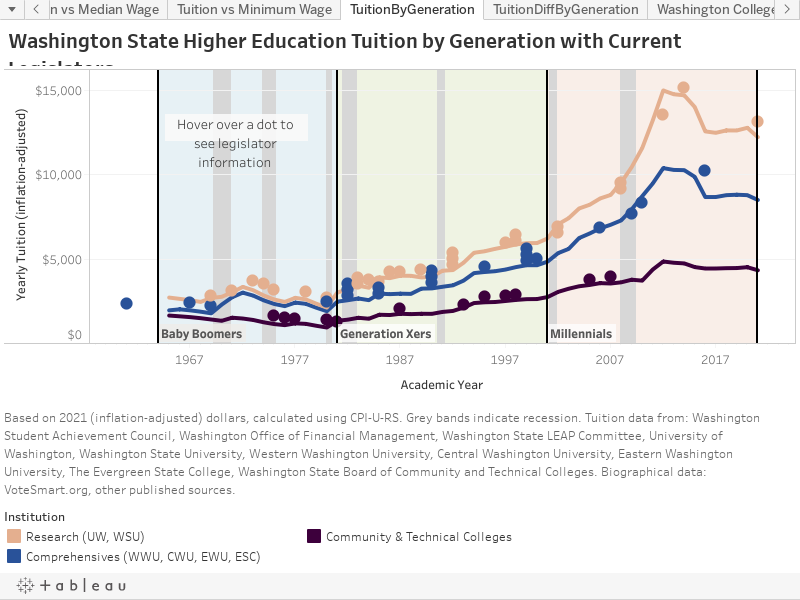 But the price tag for college over the past two decades, which is directly affected by the budgets state legislators enact, is another story. Here’s how tuition changed, generation by generation, for today’s legislators and their classmates. (Note: all figures cited below utilize 2019 inflation-adjusted dollars with 1965 tuition levels as a baseline.)

The Baby Boomers went to school from 1965 to 1980 — a time of relatively low (or even declining) tuition. At its most expensive (1972), one year’s tuition for community college was equivalent to just four weeks of full-time minimum wage work. Putting together tuition for one of the state’s 4-year schools took longer, but was certainly in the realm of possibility, at seven to nine weeks of minimum wage work.

Those born into Generation X had a very different experience from the Baby Boomers. When state revenue diminished, legislators chose to let tuition increase rather than enact revenue reforms to keep college affordable. As a result, while Gen Xers were in college (from 1980 to 2000), the cost of a degree from one of the state’s research universities (the University of Washington or Washington State University) more than doubled. Likewise, at state comprehensive schools (like Western, Central, or Eastern Washington University, or Evergreen State College), tuition became 2.35 times more expensive. Community and technical college tuition increased 61 percent.

As bad as the tuition hikes were for Generation X, far worse was to come for Millennials. Legislators kept cutting funding, and as a consequence, tuition kept climbing. By 2016, tuition at state research universities was an astounding 5.5 times more expensive; at comprehensive schools, tuition climbed 4.9 to 5.5 times (depending on the institution); and at community and technical colleges, tuition peaked at 2.93 times more than 1965 levels.

Over the past several years, legislators have restored some state higher education funding, and as a result, tuition costs have declined — but only in comparison to the sky-high costs of the early-to-mid 2010’s. Tuition is still far higher for Millennials than for any preceding generation. 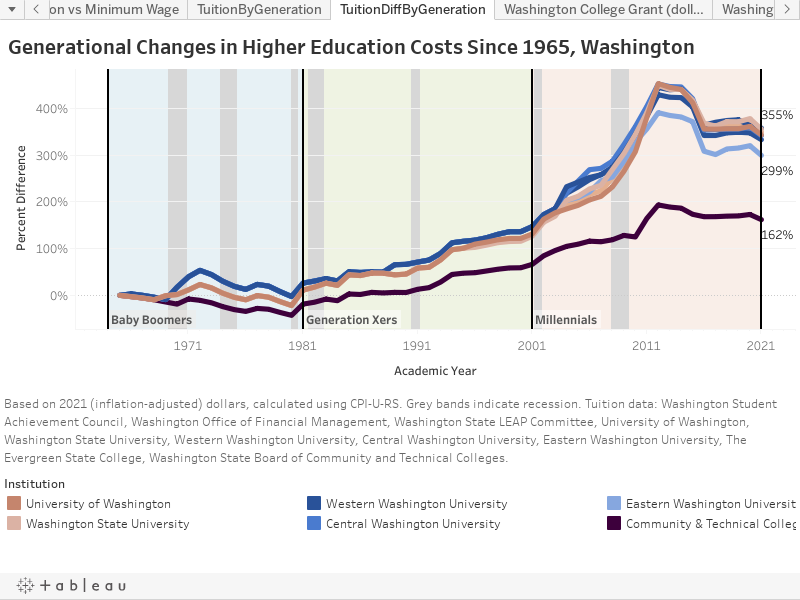 And even though legislators recently expanded funding for the Washington College Grant (formerly called the State Need Grant), the income thresholds for that aid will still put much of it out of reach for working families. The expansion takes effect in 2020 — but here’s what the new program would mean for a family of four in 2019, with one student attending the University of Washington and both adults working full-time.

If both adults earn minimum wage ($12/hour), the student would receive 100 percent of the state grant, leaving about $700 remaining in tuition and fees. But that aid falls off quickly: at a yearly family income of $66,650 ($16/hour per adult), the same student would receive just 24.5 percent of the maximum possible grant, leaving more than $8,800 still to be paid (or more likely, borrowed) — more than double the cost many legislators, and their classmates in preceding generations, paid.

As we’ve previously reported, this is why the “high-tuition/high-aid” model – in which colleges charge higher tuition overall, but offer larger financial assistance packages to low-income students – is actually a step backward in terms of access and affordability.

And for young people who go to college despite the price tag, the student debt that often accompanies high tuition has a profound impact on their lives. An increasing number of today’s graduates are postponing homeownership, marriage and childbirth. High tuition effectively erases those options from life’s menu — and it doesn’t exactly set Washington up for a vibrant economic future.

The underlying problem with funding for higher education is Washington’s too-narrow tax base, which not only continues to shrink relative to the whole economy, but also relies too heavily on contributions from low- and middle-income state residents and taxing the wealthy too lightly.

It’s a broken status quo — but legislators have the power to fix it. When they reconvene next January, they should enact revenue reforms that drive tuition costs down to year 2000 levels. Since there’s no definitive name for the next 20-year cohort yet, by doing so, we could call them the Education Generation here in Washington. Doesn’t that have a nice ring to it?

Provide students with hope for a brighter future