In 2002, I heard an economist characterizing this figure as containing a valuable economic insight. He wasn’t sure what the insight was. I have my own answer.

The economist talked of the figure as a sort of treasure map, which would lead us to the insight. “X” marks the spot. Dig here.

The graphic below tells three stories.

First, we see two distinct historic periods since World War II. In the first period, workers shared the gains from productivity. In the later period, a generation of workers gained little, even as productivity continued to rise. 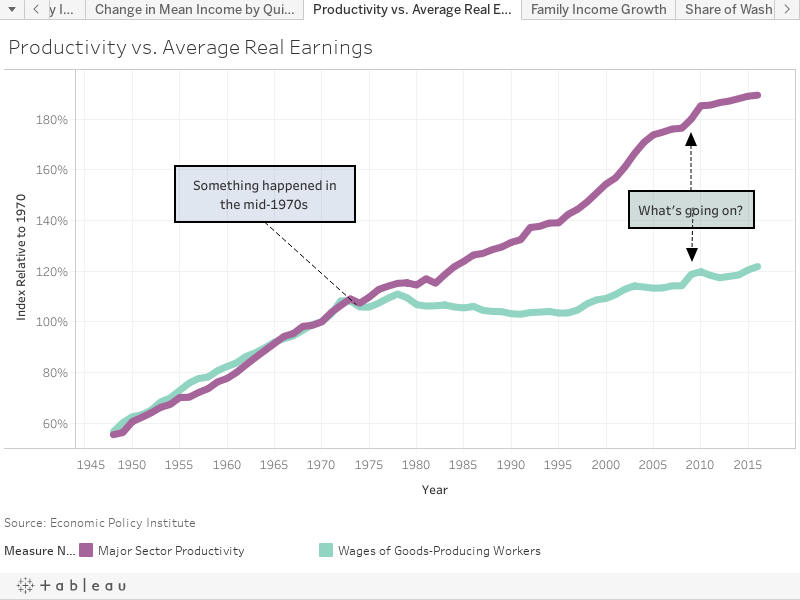 The second message is the very abrupt transition from the post-war historic period to the current one. Something happened in the mid-70’s to de-couple wages from productivity gains.

The third message is that workers’ wages – accounting for inflation and all the lower prices from cheap imported goods – would be double what they are now, if workers still took their share of gains in productivity.

A second version of the figure is equally provocative. 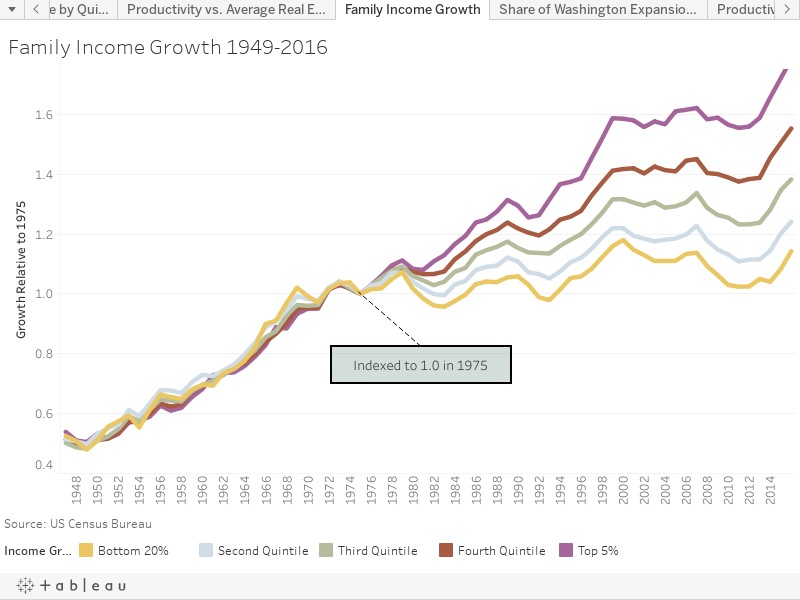 This graphic shows the same distinct historic periods, and the same sharp break around 1975. Each colored line represents the growth in family income, relative to 1975, for different income percentiles. Pre-1975, families at all levels of income benefited proportionately. Post-1975, The top 5% did well, and we know the top 1% did very well. Gains from productivity were redistributed upward to the top income percentiles.

This de-coupling of wages from productivity has drawn a trillion dollars out of the labor share of GDP.

Economics does not explain what happened in the mid-70s.

It was not the oil shock. Not interest rates. Not the Fed, or monetary policy. Not robots, or the decline of the Soviet Union, or globalization, or the internet.

Let’s go back before World War II to the Great Depression. Speculative unregulated policies ruined the economy. Capitalism was discredited. Powerful and wealthy elites feared the legitimate threat of Communism. The public demanded that government solve our problems.

The Depression and World War II defined that generation’s collective identity. Our national heroes were the millions of workers, soldiers, families and communities who sacrificed. We owed a national debt to those who had saved Democracy and restored prosperity. The New Deal policies reflected that national purpose, honoring a social safety net, increasing bargaining power for workers and bringing public interest into balance with corporate power.

In that period, the prevailing social contract said, “We all do better when we all do better.” My prosperity depends on your well-being. In that period of history, you were my co-worker, neighbor or customer. Opportunity and fairness drove the upward spiral (with some glaring exceptions). Work had dignity. Workers earned a share of the wealth they created. We built Detroit (for instance) by hard work and productivity.

Our popular media father-figures were Walter Cronkite, Chet Huntley, David Brinkley, and others, liberal and conservative, who were devoted to an America of opportunity and fair play.

The sudden change in the mid-70’s was not economic. First it was moral, then social, then political, ….. then economic.

In the mid-70’s, we traded in our post-World War II social contract for a new one, where “greed is good.” In the new moral narrative I can succeed at your expense. I will take a bigger piece of a smaller pie. Our new heroes are billionaires, hedge fund managers, and CEO’s.

In this narrative, they deserve more wealth so they can create more jobs, even as they lay off workers, close factories and invest new capital in low-wage countries. Their values and their interests come first in education, retirement security, and certainly in labor law.

We express these same distorted moral, social and political priorities in our trade policies. As bad as these priorities are for our domestic policies, they are worse if they define the way we manage globalization.

The key to the treasure buried in Figure 1 is power relationships. To understand what happened, ask, “Who has the power to take 93% of all new wealth and how did they get that power? The new moral and social values give legitimacy to policies that favor those at the top of our economy.

We give more bargaining power and influence to the wealthy, who already have plenty of both, while reducing bargaining power for workers. In this new narrative, workers and unions destroyed Detroit (for instance) by not lowering our living standards fast enough.

In the new moral view, anyone making “poor choices” is responsible for his or her own ruin. The unfortunate are seen as unworthy moochers and parasites. We disparage teachers, government workers, the long-term unemployed, and immigrants.

In this era, popular media figures are spiteful and divisive.

Our policies have made all workers feel contingent, at risk, and powerless. Millions of part-time workers must please their employer to get hours. Millions more in the gig economy work without benefits and have no job security at all. Recent college graduates carry so much debt that they cannot invest, take risk on a new career, or rock the boat. Millions of undocumented workers are completely powerless in the labor market, and subject to wage theft. They have negative power in the labor market!

We are creating a new American aristocracy, with less opportunity – less social mobility and weaker social cohesion than any other advanced country. We are falling behind in many measures of well-being.

The dysfunctions of our post-1970 moral, social, political and economic system make it incapable of dealing with climate change or inequality, arguably the two greatest challenges of our time. We are failing our children and the next generations.

X marks the spot. In this case, “X” is our choice of national values. We abandoned traditional American values that built a great and prosperous nation. Our power relationships are sour.

We can start rebuilding our social cohesion when we say all work has dignity. Workers earn a share of the wealth we create. We all do better, when we all do better. My prosperity depends on a prosperous community with opportunity and fairness.