Worried About Medicare for All, Insurers Are Stockpiling Your Money

They're making record profits, but not lowering premiums

For most of 2019, stock market advisors have said to steer clear of investing in health insurance companies. In fact, health-care stocks are lagging the broader market by their largest margin since 2006, even though many are producing record profits.

Stock investors are afraid the “Medicare for All” movement embraced by some Democratic presidential candidates will disrupt the market, gutting their golden goose.

The Affordable Care Act certainly didn’t. Five years after its implementation, insurers are profiting from the individual market and benefitting from Trump’s tax cuts for corporations. According to Standard and Poor’s, they are even profiting from their bogeymen, Medicare and Medicaid.

They aren’t worried they won’t make money. They’re worried they’ll no longer make absurd amounts of money. Insurance companies keep a reserve to buffer their finances against future losses. Recently, those reserves have ballooned. Like squirrels in Westeros, they’re stuffing their cheeks in case of an icy future.

And you’re paying for it. Insurers are taking more of your money now in case you won’t give it to them in the future.

Between 2016 and 2019, silver plan premiums for a 40-year old non-smoker in Washington on the Health Benefit Exchange (before federal tax credits) increased 67 percent to more than $1,800 annually.

The Affordable Care Act was built on the presupposition that as the costs of doing business decreased, insurers would pass along the savings to the consumers. But that forecast had a fatal flaw – it assumed that health insurance companies act morally.

Between 2013 and 2017, health reserves increased by over $2 billion for the nine largest health insurers in our state. For the five of those insurance companies on the Washington Health Benefit Exchange, reserves increased from $1.2 billion to almost $1.8 billion. That $566 million would cover the total yearly premiums for almost 100,000 people in our state. 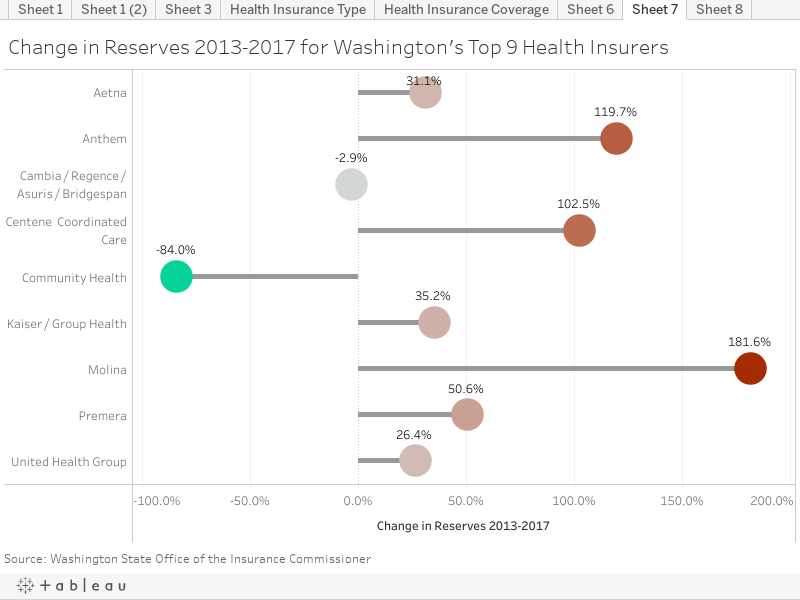 (Note in the chart that Community Health is an outlier. It’s also an outlier in other ways. Unlike other companies, it doesn’t use premiums to pay its upper management millions of dollars every year.)

Insurers tend to blame providers for the high cost of care, as they set the prices.  But we shouldn’t let the insurers pass on all the blame. In the decades-long health-care con, they’re all guilty – the hospitals, the pharmaceutical companies and the insurers.