With student debt exploding, how can we restore the promise of the Greatest Generation?

If education is the great equalizer, then steep annual tuition increases are the great divider – a reminder that a college education is quickly becoming a luxury item that fewer middle class families can afford.

Tuition at public colleges and universities has increased by 300% since 1980. Students and their families are responding by taking on ever-more debt – but it’s weighing down our economy. Total student debt topped $1 trillion at last check. Two-thirds of students are graduating with student loan debt – compared to only one third in 1992, and they owe an average of about $25,000. 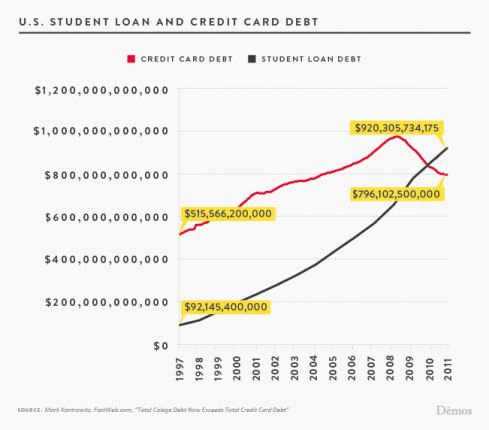 Why is this happening? In Washington state, it’s due in large part to our regressive and outmoded tax structure, which is ill-equipped to fund education. As a result the state continues shifting the tuition burden onto struggling families:

As the loan burden grows, many students are finding themselves unable to pay. From 2009 to 2011, the student loan default rate jumped 31% and bankruptcy lawyers have seen significant increases in potential clients asking for help with student debt.

The negative effects of student debt aren’t isolated to the younger generation. Its effects have metastasized throughout the entire economy – and especially to parents of students. In the last 7 years, parents have dramatically increased their debt burden in an effort to assist college-bound children. Parents now average $34,000 in student loans. Over a standard 10-year loan period, that’s closer to $50,000.

Some market watchers are already predicting the student loan bubble will be the next to pop. But even if it doesn’t, this emerging student loan crisis will have a dramatic impact on the economy. Young adults are usually the majority of first-time home buyers, but as more of them face bigger debt burdens, fewer will qualify for mortgages. They will also put off starting a family, making large purchases like cars, or trying to start a business.

The “greatest generation” knew the value of education. Many went to college on the G. I. Bill and in 1947, half of college students were veterans. They prioritized education, and they knew keeping tuition low to ensure better career opportunities for the next generation required more than just lip service.

It’s time for America to reimagine how people pay for college, and make educational opportunity one of our nation’s hallmarks again:

Our economy won’t grow – and our workers and families won’t prosper – unless we prioritize educational opportunity. That means making our universities, community colleges and vocational training not just available, but truly affordable to all.