If I claimed that a lion is a big animal while holding a teacup poodle in my hands, few people would argue. But if I said so while standing next to a life-size replica of a blue whale, most would likely disagree.

Context is key when making comparisons — but too often, it goes missing in discussions of Washington’s budget. Typically, people compare the current budget to the previous one and…that’s all. There’s no historical overview, much less any discussion of the people most affected by budget choices, or how the state’s tax code shapes spending.

So here are three key pieces of context for the Washington’s 2021-23 biennial budget, which is still being shaped by state lawmakers:

The visualization below shows yearly state spending as a percentage of total personal income in Washington. This shows us — relative to the size of the state’s economy — how the state’s budget has grown or shrunk over the past several decades. (We see similar trends using another common measure of the state economy: gross domestic product.) 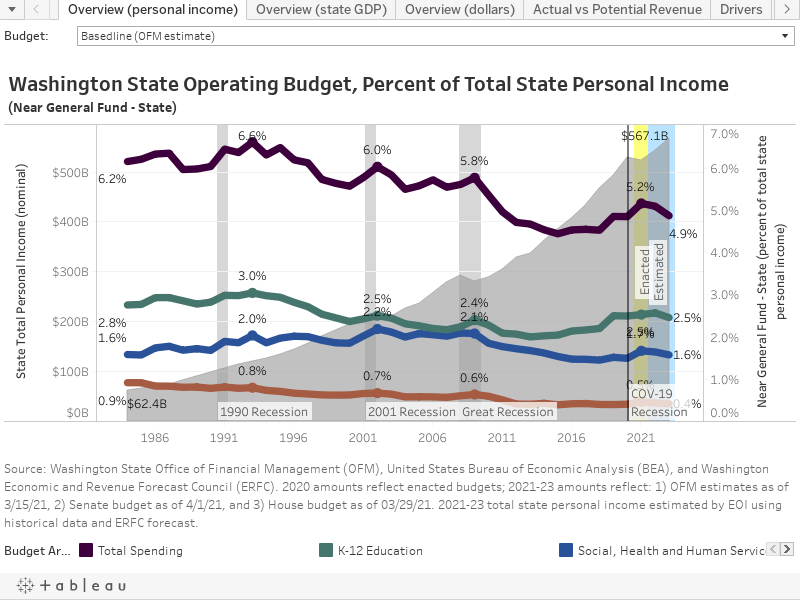 In this context, a few things jump out:

It’s also crucial to consider the people our public investments serve and invest in: we need the context of changing populations, caseloads, enrollments, etc.

The visualization below shows Washington’s yearly K-12 education spending per 1 million students, both as a percentage of state total personal income and gross domestic product. The 2020 increase is due to a drop in enrollments during the COVID-19 pandemic. 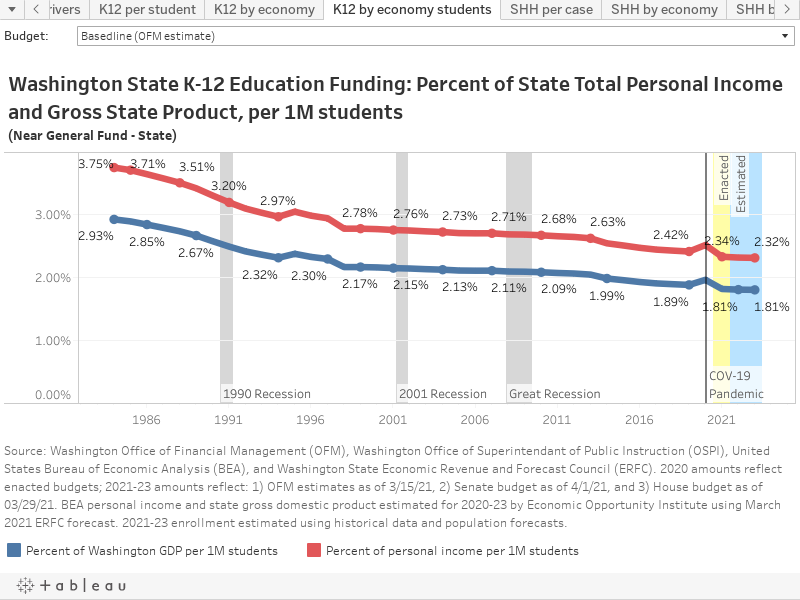 In this context, it’s clear the state has been disinvesting in K-12 education since 1984. The same trend is visible in social, health and human services, and higher education spending.

Clearly, Washington is wealthy enough, on the whole, to afford additional investments in education, health, housing and more. Adjusted for inflation, total yearly personal income in Washington has more than doubled, from $217 billion in 1993 to $523 billion in 2021, an increase of 148 percent.

So why didn’t public revenue keep up? Because the vast majority of that income increase went to the wealthy few, and Washington’s tax structure gives them lower tax rates than everyone else.

We can estimate how much this unbalanced tax structure has cost us in lost revenue, which could have been invested in our students, seniors, families, workers and vulnerable populations — the kinds of investments that build individual opportunity, healthy communities, and shared prosperity.

The visualization below shows how much additional revenue Washington would have had each year if  legislators had reformed the state’s tax code to keep revenue at a constant percentage of total personal income. 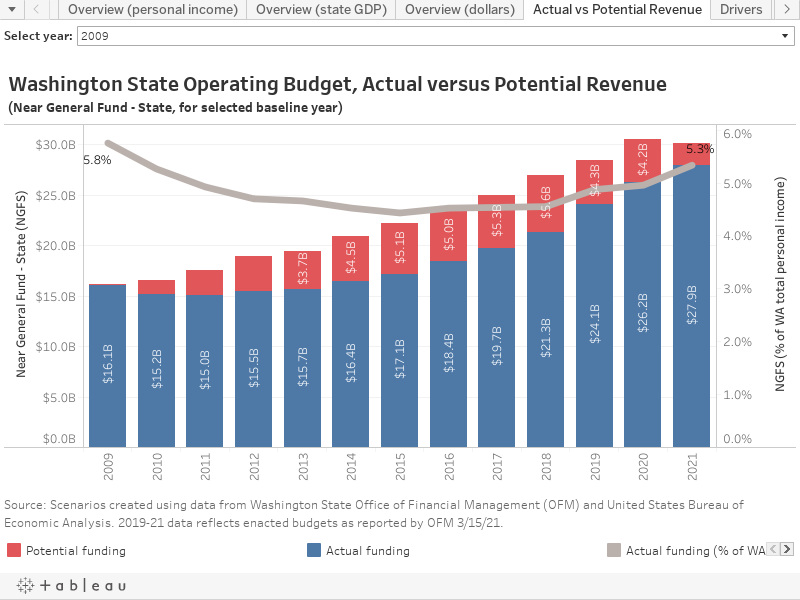 Using 2009 as the base year, Washington would have had an average of $3.9 billion yearly to invest in public services over the past 12 years — and today the state’s budget would be the same size it was then, relative to our economy.

What We Can Do

We can’t go back in time to urge lawmakers to fix Washington’s broken, unfair tax code — but we can urge them to make the right choices this year to enable investments in education, health, housing and other public needs going forward.

Lawmakers in both the House and Senate are hammering out the differences between their respective budget proposals. Reach out to your Representative and Senators and encourage them to support proposals that will correct the inequities in our state’s tax code and generate new revenue to help educate, house, and ensure access to health care for all of our residents.

As noted in EOI’s From Affluence To Prosperity brief, several measures on the table in Washington’s 2021 legislative session could move the state toward greater prosperity: