This spring, Washington lawmakers took an important step toward making college more affordable. The Workforce Education Investment Act expands the Washington College Grant (formerly called the State Need Grant), guarantees aid to students below state median income, and provides a new dedicated funding source by raising taxes on tech and other businesses. Here’s what the changes mean for students and families, and where lawmakers still have room to improve.

In the past, legislators regularly budgeted too little money to fully fund financial aid for everyone who qualified for the State Need Grant. For example, in the 2019-2020 academic year, 92,000 students received tuition assistance, and another 18,000 were wait-listed, according to the Washington Student Achievement Council. All that will change in 2020, when the state will guarantee funding for all eligible students. That is an unequivocal win for Washington’s students and their families.

The new grant program also expands students’ educational options. Any Washington resident who qualifies under income guidelines and doesn’t already have a bachelor’s degree can use their grant to pursue a bachelor’s degree, an associate degree, a certificate – and starting in 2020, an apprenticeship. Grants can be used for full- or part-time attendance at 66 schools in Washington, including many of the state’s private universities. The funds can be applied to any educational expense, including tuition, room and board, and books. That kind of flexibility is well-suited to the needs of today’s students.

What it means for students and families

The Washington College Grant will make higher education tuition-free for students at or below 55 percent of median family income. It will reduce costs for students above that threshold up to the median – but the size of that reduction depends on income, family size, and the school or program attended. People above median income will still have to pay full freight. For example: 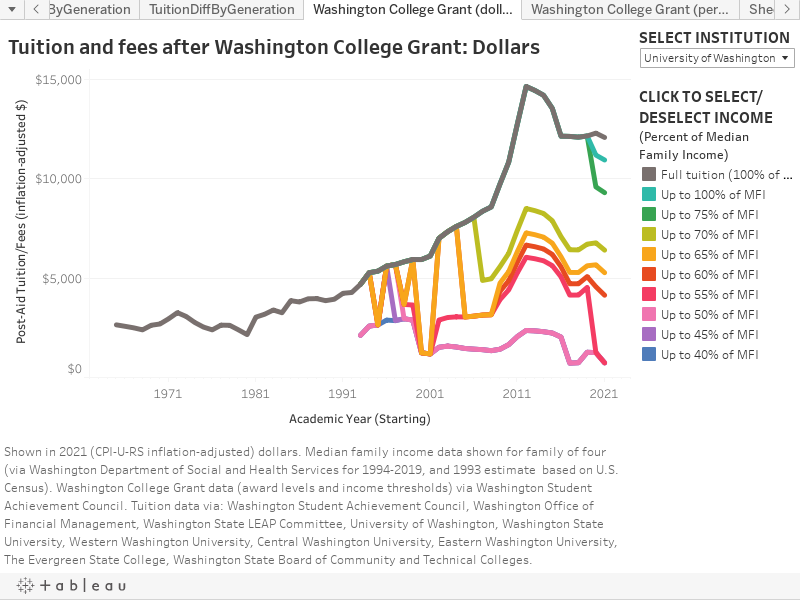 Fixes for the future

Public policy should be a building block for a better society. By that measure, the Washington College Grant represents an important step forward – but certainly not a stopping point.

Equitable grants: One wrinkle to iron out are inequitable grant amounts for students with family incomes between 75 percent and 100 percent of the state median (~$69,500 to ~$92,690). Under the new program, all students in that range will receive the same grant: 10 percent of the maximum award amount (for example, about $1,150 for the University of Washington).

But as shown below, this leaves families at the lower end of that range – for example, at 80 percent of the state median – paying a higher share of their income for tuition than those at the median (who have higher incomes). Legislators should raise additional revenue and adjust financial aid awards so families below the median pay a smaller share of their income for tuition. (Note: 2020 numbers shown below utilize scheduled Washington College Grant awards, applied to 2019 tuition/fees and median family income.) 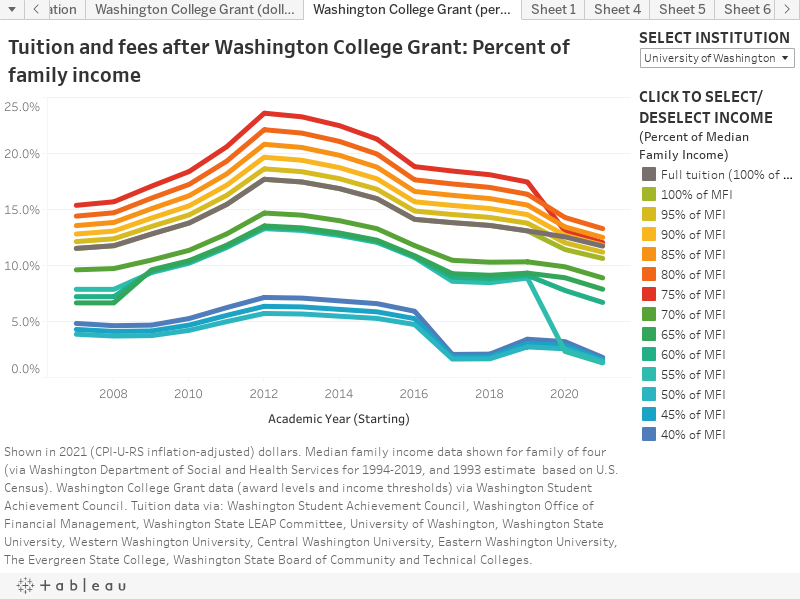 Expanded funding: Revenue for the new grant program will come from a three-tier increase in the state’s business-and-occupation tax, covering approximately one-fifth of all businesses. Microsoft and Amazon, both of which publicly supported the measure, will – on paper – pay the highest rate of 2.5 percent, which applies to “select advanced computing businesses with worldwide revenue that exceeds $100 billion.”

However, the legislation limits total contributions for companies in the highest tier to between $4 million and $7 million per year – a pittance compared to their profits. Microsoft and Amazon are expected to contribute between 2 percent and 3.6 percent of the total $380 million in raised in the first two years of the tax increase. Overall, just 82,000 of the state’s 380,000 businesses will pay the tax.

Considering the importance of a college or trade degree to nearly every company in the state, more businesses ought to be contributing – and big tech, especially, should not be getting preferential treatment. Lawmakers should expand the new tax measure to cover more businesses, raise the cap on Microsoft’s and Amazon’s contribution, and utilize the additional revenue to further expand state financial aid and reduce tuition overall.

Tuition reductions: Tuition for public higher education is still extremely high by historical standards. Half of Washington’s middle class (by definition) is above the median income, and therefore doesn’t qualify for aid, even under the new state program. And as shown above, tuition levels and funding for financial aid are very much subject to change depending on the state’s budget circumstances. What will happen when the next recession devastates Washington’s budget?

That’s why the best way to ensure higher education is once again affordable for all – as it was for many current lawmakers who attended one of Washington’s public colleges or universities – is to significantly reduce overall tuition overall. To accomplish that, legislators need to reform Washington’s outdated and regressive tax code, in order to generate additional revenue to invest in higher education and other crucial public services.

For years, Washington’s college financial aid was a sad case of how to over-promise and under-deliver to the state’s high school graduates. The new Washington College Grant addresses many of those shortcomings – but legislators still have work to do in order to ensure higher education in Washington is truly an affordable public good that is accessible to all.

Provide students with hope for a brighter future