The Economic Opportunity Institute just released a new report on the gay wage gap in Washington State. Read it here.

The Census Bureau doesn’t try to collect data on LGBT people. No administration has made that a priority.

But with some charisma, uniqueness, nerve and talent, we can learn still about queer incomes. Gay men in Washington are being paid significantly less than straight men for the same work.

Because same-sex marriage became legal nationally in 2015, we can get data about lesbian and gay people, but only if they’re married. Bisexual people count if they are married to a person of the same sex. If a bisexual woman marries a man, in the eyes of data collectors, she’s just a run-of-the-mill heterosexual.

Washington State, as a national leader on marriage equality, is fortunate enough to have four years of data on same sex-marriage from the American Community Survey.

You can’t find the data through the Census Department’s online tool, however. To actually see the unadulterated results – or get Washington-specific results – you have to go through the raw survey data and analyze it.

It will be more easily available later. The Census Department will begin tracking and releasing data on same-sex married and unmarried couples in 2020. That’s not exactly a change of heart. The Census Bureau is just repackaging what it’s already doing and asking for a cookie. They don’t get a cookie. They definitely can’t have a Colorado wedding cake.

It’s still a small data set. About 50 percent of U.S. adults are married, but it seems unlikely this statistic holds true for the queer community. The number of people in same-sex marriages in Washington almost tripled from 2013 to 2016. Either the U.S. military perfected its bomb that turns people gay, or it’s going to take time for LGBT to catch up. 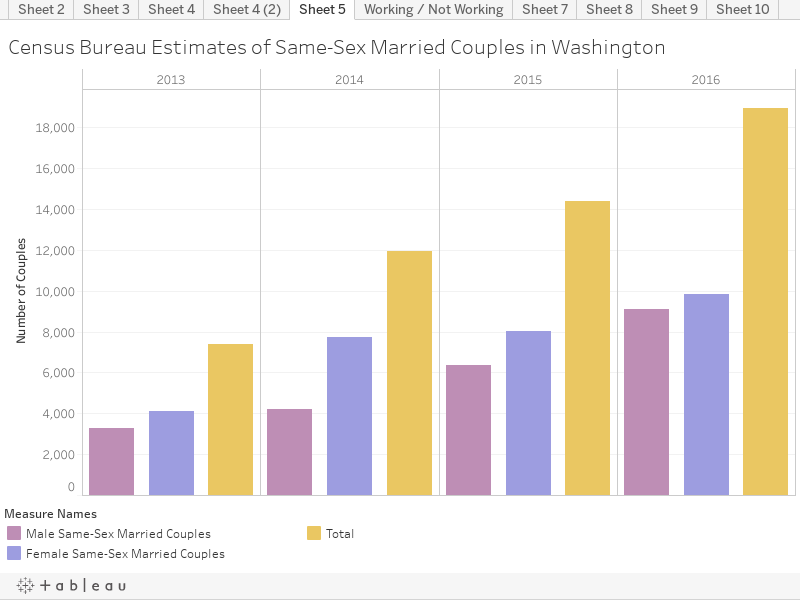 Nonetheless, non-same-sex-married lesbian, gay and bisexual people are still invisible in the Census – as are all transgender people.

When you disaggregate data for wage income for full-time married workers in Washington from 2013 to 2016, you get this lovely chart: 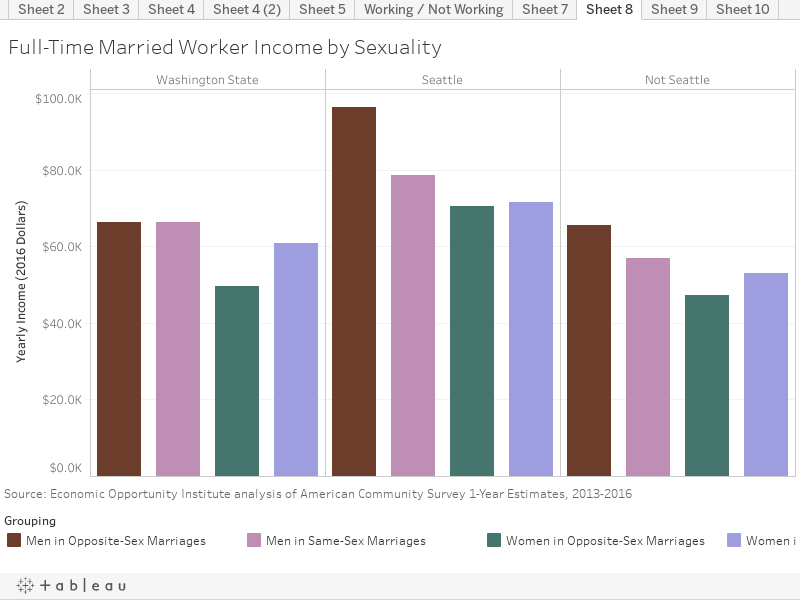 At first blush, it doesn’t make sense. Gay men make the same amount of money as straight men statewide, but they make less in Seattle and less in the rest of the state. How is that possible?

It’s because LGBT people, like beautiful birds or fluttering butterflies, migrate to find better homes – in cities. But not just any city. In Washington, they migrate to Seattle. 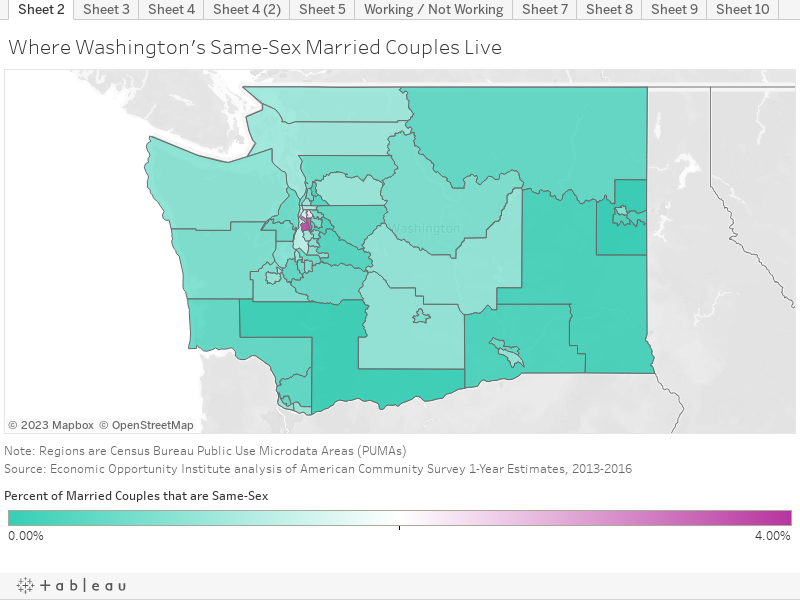 This is because Seattle has been a mecca for LGBT people since the end of World War II, when LGBT people leaving the military did not want to go home to their families and congregated in cities near military bases, such as San Francisco, Seattle, Miami and New Orleans.

Seattle is home to 8 percent of the Washington’s opposite-sex married couples, but 26 percent of the same-sex ones. Incomes (and costs of living) tend to be higher for residents of Seattle than for people in other parts of the state. So when comparing income and sexuality data statewide, the disproportionate amount of dame-sex couples in Seattle hides the true gaps in income based on sexuality.

You may also notice that there is a higher proportion of same-sex married households in West Seattle (3.67 percent) than there is on Capitol Hill (3.54 percent). That’s because queer people aren’t just ignored; they’re being pushed out. In Seattle LGBT people are losing their neighborhoods.

But if LGBT people are rainbow-colored butterflies, then cisgender heterosexuals are crabgrasses, springing up everywhere and taking over. Affluent straights are no longer afraid to live next to LGBT people, and are taking over their neighborhoods and pricing queer people out.

Well, maybe they’re not all OK with living next to LGBT people. Hate crimes on Capitol Hill have been steadily increasing since 2012. But at least we left behind rainbow crosswalks.

As is the case with why women are paid less than men, part of this can be explained by different jobs – but only part. 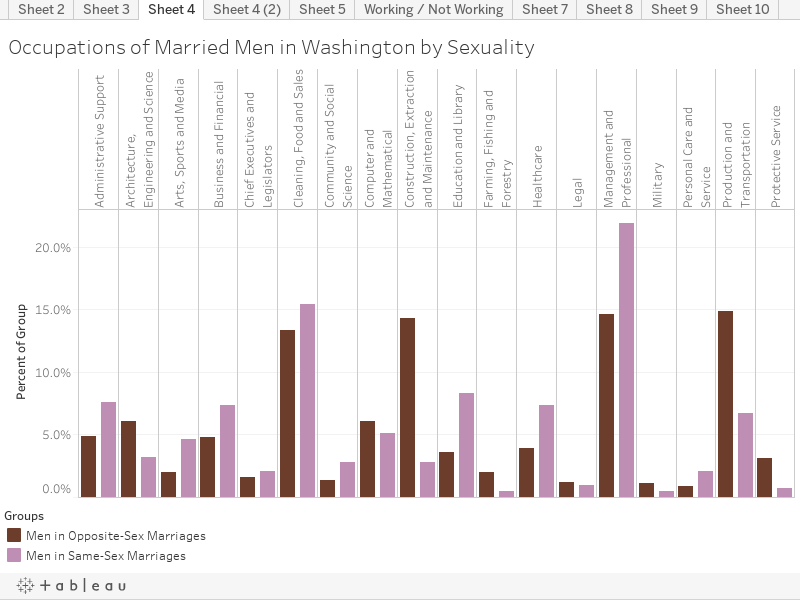 For women in same-sex marriages, the opposite is true. They are more likely to work in science, construction, policing, the military, computers and mathematics, and less likely to work in administrative support, healthcare, education and personal care. 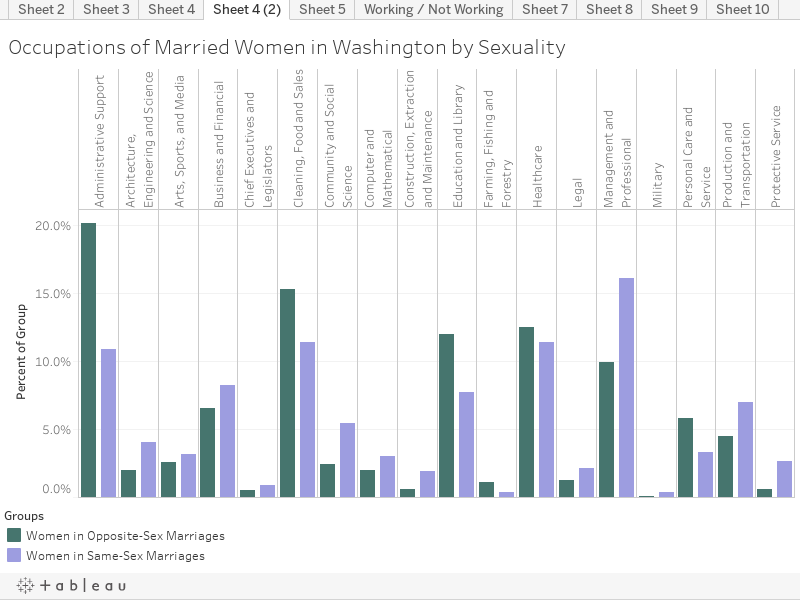 This holds true even in the same fields.

This is a trend that has been backed up by researchers multiple times. In 2015, Marieka Klawitter of the University of Washington undertook a meta-analysis of 31 studies.  She found that on average, gay men earned 11 percent less than heterosexual men. Lesbians, however, earned 9 percent more than heterosexual women.

It’s because we, as a culture, financially penalize femininity. Gay men are stereotyped as effeminate and suffer the consequences. Lesbians profit from their stereotyped masculinity, but not to the extent that they are equal with men.

It has been repeatedly shown that girls are less likely to go into STEM fields not because of their inherent aptitude, but because of negative messages they hear about girls being bad at math, and that girls are expected to pursue people-oriented careers. When gay boys are told by their peers that they are essentially girls, it follows that they are subject to the same career pressures. 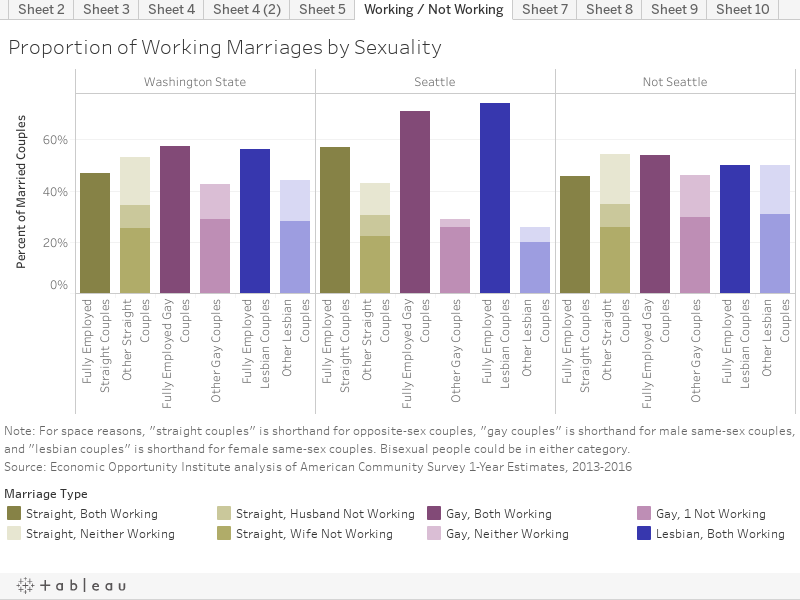 But isn’t that often the case? People who are lower paid work more hours just to get by. Minimum wage workers have to work three different jobs to afford a two-bedroom apartment in Seattle now.

So as Pride comes up this month, remember why is exists: we’re not treated equally, and we’ll cover everything in glitter until we are.